The harmonic minor scale (or Aeolian ♯7 scale) has the same notes as the natural minor scale except that the seventh degree is raised by one semitone, creating an augmented second between the sixth and seventh degrees. Thus, a harmonic minor scale is represented by the following notation: 1, 2, ♭3, 4, 5, ♭6, 7, 8. This lesson shows the seven patterns beginning on the the first fret, sixth string. And then, covering the entire neck. I am playing though all the patterns using Hammer-ons and Pull-offs in each pattern. You can also playing along with the videos using alternate picking, and then add the legato in later as you get more comfortable. The pdf shows all the scale patterns, the notation and tablature, as well as chord charts. CLICK HERE FOR THE PAGE TO THIS LESSON In this lesson we will take a look at some string skipping arpeggios that are used by players like Eric Johnson, Paul Gilbert, Nuno Bettencourt, Shawn Lane, and Guthrie Govan. The idea is to achieve three octaves of major and minor arpeggios in movable patterns so you can learn, and use in your own solos.

We are using wide stretches hybrid picking, hammer-ons, pull-offs, and string skipping to make this legato arpeggio sequence happen. CLICK HERE FOR THE PAGE TO THIS LESSON. Check out the new store at practicetheguitar.com Download and learn licks, technique exercises and soloing techniques.

Join https://www.practicetheguitar.com/ and become a member to practice with tons of video lessons at multiple tempos, with full tablature and notation, and backing tracks to practice with. For this lesson we are trying to connect the five patterns of the E minor pentatonic scale with the seven patterns of the E minor scale. This is a useful way to improve your knowledge of the fretboard as well as giving you a ton of new options for playing melodies and soloing in a minor key. In this example we are doing all of these in the key of E minor.

I am numbering the five patterns of the pentatonic scale as the note fall in the key. The E minor scale is E F# G A B C D E.

The E minor pentatonic scale is E G A B D E, which is the same scale with the second and sixth notes removed. Pattern one of the scale just simply starts on E, Pattern three starts on G, Pattern four on A, and so on.

Join https://www.practicetheguitar.com/ and become a member to practice with tons of video lessons at multiple tempos, with full tablature and notation, and backing tracks to practice with. CLICK HERE FOR THE PAGE TO THIS LESSON. 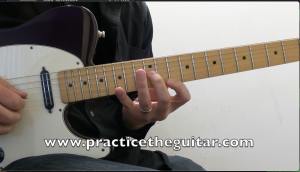 In this arpeggio exercise I want to cover share a trick based around a concept that will add some sophistication to your improvisations (while also being sure to turn heads with its attention-grabbing coolness!): open-voiced, string-skipping 7th arpeggios. The basic idea is this: we split up the arpeggios into six-note patterns with two notes per string on three strings, skipping a string in between each.

Join https://www.practicetheguitar.com/ and become a member with access to many video lessons at multiple tempos, including full tablature and notation, and backing tracks to practice with. CLICK HERE FOR THE PAGE TO THIS LESSON. This exercise covers common licks used by rock guitar gods such as Eddie Van Halen, Slash, Paul Gilbert, Yngwie Malmsteen, Vinnie Moore, Michael Schenker, Randy Rhoads, Zack Wylde, Marty Friedman and many others. Using these kinds of licks during at least one point in a solo is a cornerstone of rock lead guitar playing and is an effective device for raising energy and intensity. The exercise includes Backing Tracks at 15 tempos, videos at 15 tempos, a tablature and notation pdf, and a GUITAR PRO FILE INCLUDED! After you purchase this product, you’ll get an email with a download link for the zip file you need to download. The download link will also appear on the confirmation screen for your order. Finally, all products you purchase from us will be visible in your “My Account Area” when you are logged into store.practicetheguitar.com. The zip file will need to be uncompressed to see all of the files included. CLICK HERE FOR THE PAGE TO THIS LESSON Circle Of Fifths On The Guitar

In this 12 Major Key Scales Circle Of 5ths Legato exercise we are going to play through 12 keys on the guitar in one general area on the neck. This is an an awesome way to spice up your soloing, but also to learn all the major scales on the guitar. This will also help you to memorize the circle of 5ths, as well as all the major scale patterns needed to play in all 12 keys. This will also show you how you can improve your legato playing, and increase left-hand strength.

This exercise covers the seven patterns of the major scale all starting from the note C. You will be changing key 12 times here. There are many technique aspects of this exercise that will help you to improve your soloing and single note playing, This will help you significantly when your playing over chord changes.

These blues licks are designed to help you to connect any phrase on the fretboard eventually in any key. The idea is that you learn a lick starting at pattern 1 of the pentatonic scale. In this case we are also using notes form the blues scale and the major pentatonic scale. These licks are in the key of G over a G7th chord.

Once you can play these phrases in the third position next we will make this same phrase happen in the same key but in the seventh position on the neck. Then the same licks in the twelfth position, and lastly an octave up in the fifteenth position. This type of practice will help you to learn how to play any phrase you want without having to be limited to any one place on the neck. This lesson is helpful with many techniques, hammer-ons, pull-offs, bends, and a great way to help you build your blues vocabulary.

Join https://www.practicetheguitar.com/ and become a member to practice with tons of video lessons at multiple tempos, with full tablature and notation, and backing tracks to practice with. You enjoy licks?! I know I do! Working on some legato type ideas here. These lines have helped me a ton. You can download a lesson on legato playing here https://store.practicetheguitar.com/product/slippery-legato-patterns/ Looking For New Ideas For Your Blues Soloing? We are psyched to launch our new downloads store! You can find it at http://store.practicetheguitar.com. Lesson downloads covering lots of Blues/Rock licks, Slides, Half Step Bends, Whole Step Bends, Bend Release, Hammer-ons, Pull-offs, Vibrato, and Double Stops. Also some String Skipping, and Legato lessons for you as well. We have nine lesson packs available now, with more content coming. Each lesson pack contains a video lesson, videos to practice with, backing tracks, as well as tabs/notation/Guitar Pro files.
Next Page »

In this lesson we will take a look at some string skipping arpeggios that are used by players like Eric Johnson, Paul Gilbert, Nuno Bettencourt, Shawn Lane, and Guthrie Govan. The idea is to achieve three octaves of major and minor arpeggios in movable patterns so you can learn, and use in your own solos. […]

More Posts from this Category